ALL of these mega successful people FAILED OVER AND OVER before they succeeded.

👎🏼They had times where people didn’t believe in them. Before launching Microsoft, Bill Gates had dropped out of Harvard University and was the co-owner of a business called Traf-O-Data, which later failed. 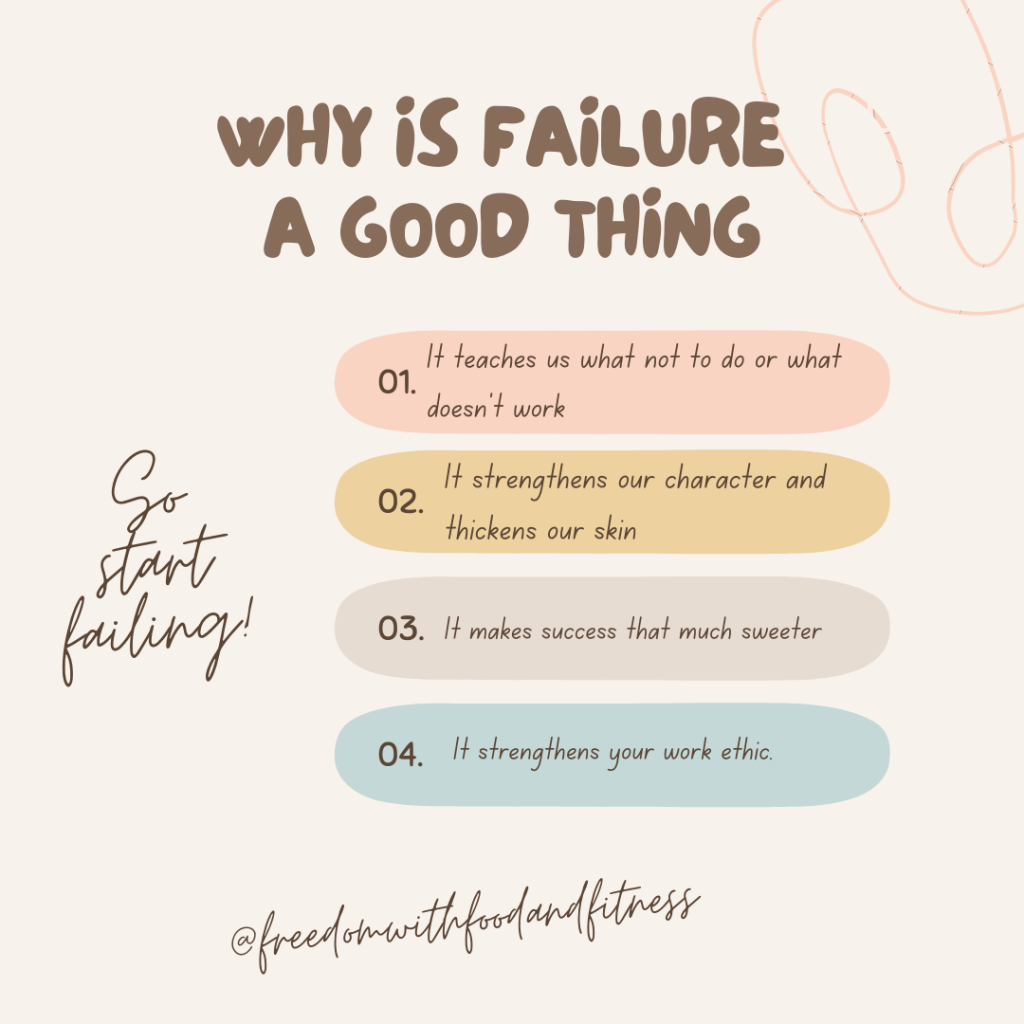 👎🏼They had times where they didn’t believe in themselves. JK Rowling, before the mega-famous Harry Potter series (and subsequently EVERYTHING that goes along with that franchise) was on welfare, unemployed, and trying to take care of a five-month-old baby in the wake of her divorce.

But they knew, deep down, that THEY WERE WORTHY. That sense of worthiness and that sense of place in the world were the reasons they kept trying until they ultimately succeeded…and succeeded big.

So, FAILURE IS A GOOD THING!

1. It teaches us what not to do or what doesn’t work. If we don’t try different things, we never know what actually works, and what works best. We can have ideas and do research, but until we actually try things or execute plans, we just don’t know. If you’re afraid to try intuitive eating because you’re afraid you’ll become a fat, “unlovable” mess—there’s no actual evidence that that will happen to YOU, until YOU take the leap.

2. It strengthens our character and thickens our skin. Honestly, I’m a stronger person for every loss and failure I’ve had. I had a horrible experience at the last job I had. My boss had it out for me, and no matter what I did, it wasn’t good enough. I never felt like I fit in there. But I took that experience and realized that not everyone will like you. That you don’t need to be a people pleaser to succeed at work. That I needed to be vulnerable and uncomfortable sometimes to make genuine connections at work.

3. It makes success that much sweeter. All the rejections I’ve received for my intuitive eating book proposal will be SO worth it once I find a publisher or literary agent willing to take a chance on me. The wellness genre is saturated right now, so if you’re not a celebrity or don’t have a massive social media presence, it’s extremely difficult to get representation. But I know my words, my strategies to recover, and my experiences could help so many women out there, so I keep plugging away.

4. It strengthens your work ethic.

I have a folder of rejection letters for my intuitive eating book. Each one fuels my fire to find an agent and publisher that believes in my writing and ideas. I’m not just going to GIVE UP because some people don’t see my vision. It will happen if I keep trying and be patient.

So try new things. What’s really the worst thing that can happen? And follow that up with, is that a LIKELY outcome? or Would that HONESTLY be that bad? If you gained weight, would it be the worst thing in the world? If you all of a sudden didn’t get objectified by strangers for your looks, is that really going to dismantle your self-worth? If you let go of control over your weight, what you eat, the number of calories you consume, what would happen?

Be curious. Be brave.

The waitlist is filling up for my FREE FOOD FREEDOM MASTERCLASS series this spring! Send me your email below, DM me on Instagram–@FreedomwithFoodandFitness or at freedomwithfoodandfitness@gmail.com

I am in training to be a Certified Intuitive Eating Counselor and am the founder of Freedom with Food and Fitness, an online community where I help women heal their relationships with food, weight and their body. View all posts by Alana Van Der Sluys

Processing…
Success! You're on the list.
Whoops! There was an error and we couldn't process your subscription. Please reload the page and try again.

Freedom with Food and Fitness

Freedom with Food and Fitness